Tony Mertlik, GBC Engineering Manager and leader of the team that developed the GBC 8500HS Cyclone, has been with the company for over 12 years and in the printing and finishing industry for over 20 years. A native of the Czech Republic, Tony is regarded as one of the world’s foremost experts on laminating systems.

Düsseldorf (GERMANY) –GBC, an ACCO Brands (NYSE: ABD) business and market leader in the manufacturing and distribution of laminating equipment and supplies, successfully achieved a new Guinness World Record at Drupa 2008 by establishing the fastest time to laminate 100 square meters of paper. The GBC team was able to laminate 102.2 square meters of paper in just 40.53 seconds. The new GBC 8500HS Cyclone Laminating System and GBC High Bonding Strength (HBS) film – both debuted at Drupa – were put to the test in this first-ever laminating challenge. The well-attended event took place on June 2nd at GBC’s stand D05 in Hall 11. Gareth Deaves, an adjudicator from the Guinness Book of World Records, confirmed the time of the lamination run and presented an award to the jubilant GBC team.

This extraordinary technical endeavour began with the “go” signal when the first sheet entered the laminator. Only the portion of the paper surface actually covered by the laminating film was measured. The clock was stopped when the last sheet to complete the 100 square meters exited the laminator. Witnesses and the adjudicator from the Guinness Book of World Records verified that the sheets were properly laminated, without creases or air pockets, and that the total laminated surface was at least 100 square metres.

Ron Butterman, GBC Director of Marketing, comments: “We are extremely proud of Tony Mertlik, Mark Elman, Glenn Koepke, and all the talented engineers on the team for their efforts to develop this world-class laminator. Thanks to their skills, we have attained this new Guinness Book of World Records milestone – and also provided a convincing demonstration of how printers can finish their own output in record time.”

Mertick, Elman, and Koepke now hold the Guinness World Record in their names.The GBC 8500HS Cyclone is a commercial laminator designed for single-sided lamination of high-volume print runs. Running at speeds up to 500 ft (150 m) per minute, this system can cut production time by one-half or more without sacrificing accuracy, control, and quality. 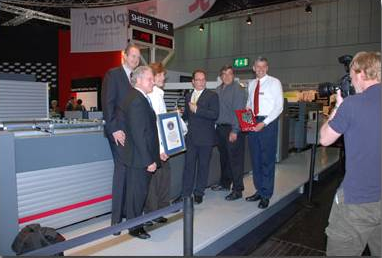 The key to the GBC 8500HS Cyclone’s high-speed, high-quality output is innovative new technology that improves adhesion at ultra-high speeds, and then separates each sheet accurately without tearing or slowing the process.

With precise controls and strong adhesion at extremely high speeds, the GBC 8500HS Cyclone also delivers maximum efficiency. Operator friendly, it is easy to quickly configure job settings from feeding through stacking, including paper movement, sheet overlap, speed, film tension and separation. Job parameters can also be retained in memory for recurring jobs. A touch-screen control monitor reports productivity by shift, day and job, including film used and time remaining on the job.

During the Guinness World Record event, the GBC 8500HS Cyclone impressed the visitors with its innovative new technology that ensures consistent adhesion when running at ultra-high speeds. An efficient closed-loop water heating system enables the laminator to maintain a stable operating temperature, even on long runs. After leaving the laminator, an electronically controlled, motorized decurling bar removes excess curl in the laminated sheets for consistently flat output.

At the system’s separator, a track-mounted snapping assembly remains stationary while running and maintaining its grip over the entire sheet. The result is clean, accurate separation and optimal reliability.